Home/Uncategorized/Clonkeen College – Kicks Off
Previous Next

A soggy Sunday morning, April 12th 2015 and the rain seemed determined to make mush of the new, flat, even, drained pitches in Clonkeen College – a new begining for Park Celtic 11-a-side games. It was more remeniscent of a cold, wet November day.

The u16 team kicked off against Blessington and our roving reporter was pitchside to give us a small synopsis of each match:

The team started well going 1-0 up with a great strike from Gary hawe , some fabulous football being played. As the weather started to subside the team went from strength to strength with additional goals from Niall O’Leary (2)  Jake Walker, and Justin Dwyer Griffin had Park well in control finally winning the game by a 5-0 score line. It was great to play on such a flat pitch which suited the teams style of passing and the team are looking forward to playing there next home game there. The score line leaves the U16A1 in a strong position in the league and well positioned in the cup .

Next came the U13C   vs Blessington
A goal in the last 5 minutes by Matthew Cassidy gave Park Celtic a 1-0 victory over Blessington. This was a hard fought victory, based on some great goal keeping by Charlie Mullins and sterling defensive work by Sean Droop, Matthew Tweedy, Sean Molloy and Jack O Neill.  Zack McCarthy replaced Jack midway through the first half, and gave a great display on his first time playing left back. Park started with  5 in midfield, Daniel O Leary and James Reilly patrolled the wings, with Matthew Barry, Jack Crowe and Matthew Cassidy in the middle. Harry O Brien worked very hard up front. The first half was very even, with chances for both sides. Park reverted to a 4-4-2 in the second half, with Matthew Cassidy going up front.  Alex Feyden and Freddie Mullins both came on, and contributed to the second half effort. With 5 minutes left, Park would have settled for a 0-0 draw as Blessington had the better of the second half. However, following hard work and a great cross by Harry O Brien from the left wing, Matthew Cassidy popped up to turn the cross into the Blessington net. Matthew is on a fine goal scoring run at the moment, with 4 goals in the last 3 games. There was still time for some backs to the wall defending, but Park held on to take the three points.

Wrapping up the morning, as the rain fizzled out were the U14B and then C team v St. James Athletic
While the B team had no real trouble, before the ref. blew to start the final game he was having second thoughts based on the condition of the pitch after the B team had done their worst to the opposition, centre spot and the goalmouths. He said he’d be prepared to see how it went after 10 mins. which was all St. James’ needed to put 2 in the net. A rusty C team who hadn’t played in weeks then settled down to play to plan and as the half concluded, following an excellent right wing approach by Donal O’Herlihy crossing into the six-yard to allow Max Cuneen pop up and slot one home, Paul Leon then struck an excellently taken penalty after being brought down in the box to put the sides level. The second half was a right old ding-dong against a much changed St. James who had procured a few different players and one in particular who was ‘in a different league’ observed by the referee, who himself finished out the game by awarding a ‘right soft’ penalty and with the shrill of a whistle the 3 points were gone. Despite the result a fantastic spectacle of football on beautiful new pitches and a very fine venue to to be proud of, which was well respected by all.

Well done Clonkeen, all the visiting teams and well done Park Celtic. A big thanks to James for making sure everything was in place and put away afterwards. 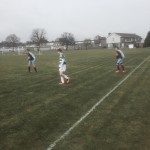 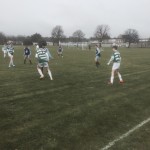 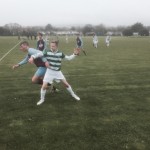 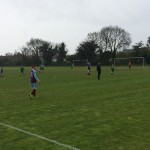 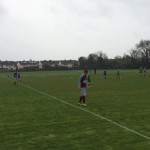 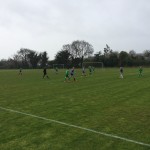 No Peril in Perrystown as u13 Girls power on

No Peril in Perrystown as u13 Girls power on