Park celtic won a highly competitive 4 team tournament involving teams from St Mary’s Boy’s, Mount Merrion, Lakekands and Park Celtic.
Park started the day with an entertaining 3-2 win over Lakekands followed by a battling 1 -0 win over Mount Merrion which put them into the final.

The final match ended with a 3 -1 loss to St Mary’s Boy’s which meant the two would meet again in the final.

Despite only having the 11 players for the tournament the team gave one more effort in the final which ended scoreless and went to penalties which Park Celtic won 4-3 .

A great end to a great tournament. 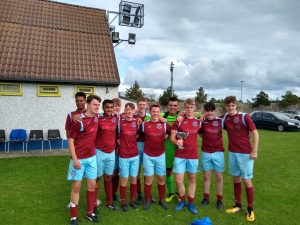